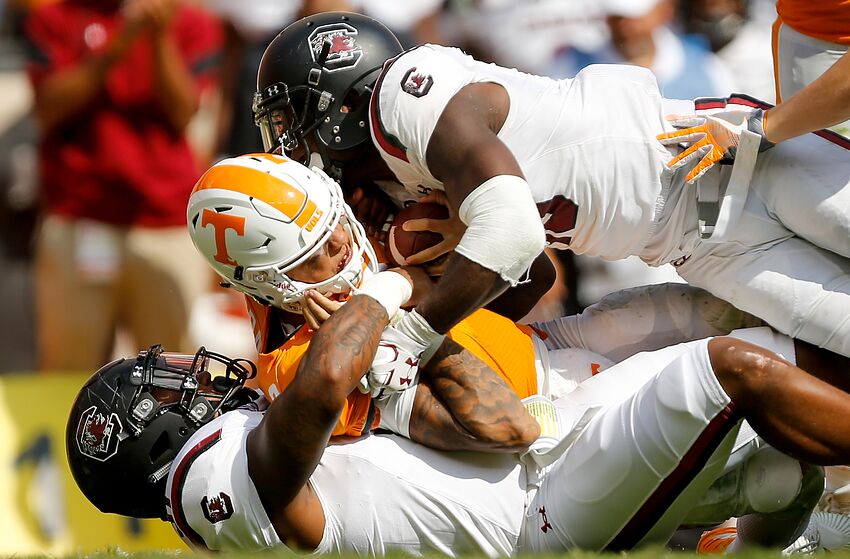 Before this weekend’s South Carolina football game, we were able to have a discussion with All for Tennessee site expert Caleb Calhoun.

The Tennessee Volunteers head to the Palmetto State this Saturday set to take on South Carolina football. It is Homecoming for the Gamecocks, and the first night home game of the season.

We at Garnet and Cocky were able to have a round table discussion ahead of this weekend’s game. All for Tennessee site expert Caleb Calhoun was able to answer some of our questions about Saturday’s game, and the Tennessee Volunteers. You can check out our answers to their questions on All for Tennessee.

Garnet and Cocky: Tennessee has really had an up and down last two weeks with beating Auburn and then getting crushed by Alabama. Do you think they will come out flat against South Carolina?

All for Tennessee: No. Getting crushed by Alabama is par for the course for any team this year, and the Vols had no shame in losing that game. Most fans and players are still celebrating that huge win over Auburn because it reset the expectations and possibilities for Jeremy Pruitt’s first team. A win at South Carolina would only magnify that, so they’ll be ready to go.

Garnet and Cocky: Jarrett Guarantano has had a fairly decent year and has entrenched himself as the Vols starter, how do you see him fairing against a pretty good Gamecocks’ defense?

All for Tennessee: This is hard to gauge because he got banged up last week, but I’m going to assume he’s 100 percent healthy. If that’s the case, he should do well. This is the fifth straight week he’s gone up against a defense with a coordinator or head coach lead by a Nick Saban protege or Saban himself. And he goes up against one in practice everyday. So he’ll be ready. He’s not the most accurate all the time, but he can take hits in the pocket, and he’s learned to trust his receivers to make plays on the deep ball, which is where the Vols have their biggest advantage.

Garnet and Cocky: How has Vols nation taken to Jeremy Pruitt? Is everyone on-board, or are there still a lot of doubters?

All for Tennessee: Well, if you can’t beat em, join em, right? Tennessee joined South Carolina and Georgia in hiring a Nick Saban defensive coordinator to lead their program, as they were 0-6 against Will Muschamp and 1-1 against Kirby Smart, needing a Hail Mary for that one win, before this year. So pretty much everyone is on board. There was a bit of concern at the beginning of the year because of how bad he was losing games. Great coaches may struggle their first year but are at least competitive, but that wasn’t the case with Pruitt. However, at the same time, he got a road win against a ranked team much faster than the overwhelming majority of coaches do, and he was dealing with a brutal schedule to start the season, more than most coaches do. So there were lots of factors that messed him up. Jeremy Pruitt’s best attribute is he isn’t Butch Jones. Vols fans don’t have to hear anymore annoying “Champions of Life” comments or ridiculous cliches, and he has not yet compromised his standards for his players, which is a huge deal.

Garnet and Cocky: Currently the Gamecocks are an 8.5 point favorite. This seems a little high to me as the teams seem pretty even on paper. Do you think that it’s mainly attributed to it being in South Carolina, or possibly because of how bad Alabama beat Tennessee last weekend?

All for Tennessee: I don’t think it’s about the Alabama game. It’s more about the overall season. I would say it’s pretty clear Tennessee’s not as good as they were when they beat Auburn. That was an 11 a.m. game for the Tigers, who were down after losing any chance at winning the West with their second loss the week before, and the Vols were coming off a bye week. Now, it’s South Carolina coming off the bye week. Personally, I don’t agree with the line, but when you look at what was expected from South Carolina at the beginning of the year, Will Muschamp being 2-0 off bye weeks in Columbia, and the added three points Vegas gives for home teams, you could see where eight and a half would be the spread.

Garnet and Cocky: Finally, what’s your prediction for the game Saturday night?

All for Tennessee: Although I just defended the line to a certain degree, I don’t think South Carolina covers Saturday night. The last six games have all been decided by six points or less, and there’s no reason to believe Saturday night will be any different. However, South Carolina will pull it out in the end. The bye week and playing at home will be too much for the Vols to overcome. I think the Gamecocks win 27-21.

I wanted to say thank you to Caleb for having a great discussion about the South Carolina Gamecocks and Tennessee Volunteers. It will be interesting to see just how it all shakes out Saturday night at Williams-Brice Stadium.